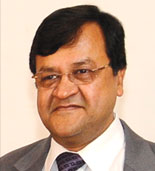 Shri Bijay Kumar Garodia is a business magnate and philanthropist. Mr.Garodia was born on 25th of August, 1957 in Tinsukia to a business family. He completed his education from Tinsukia and later from Guwahati Commerce College, Guwahati.

Even at a very young age, Mr.Garodia showed immense interest in business and went on to pursue his career in the different business ventures. With a humble beginning in the Wire Products, he entered into steel fabrication and completed several turnkey projects.

He explored great potential in timber industry and made his entry into the same in 1987. His group succeeded in becoming one of the largest manufacturers of Plywood in the North-Eastern region. His in-depth knowledge of timber industry and the contribution in this field were soon recognized and the Government of Arunachal Pradesh honoured him as one of the Director of the Arunachal Pradesh Forest Corporation Limited.

Recognizing potential in Infrastructure sector in the North-East region, he made a foray into cement manufacturing. He set up a benchmark in cement manufacturing in the North-East region by installing and promoting three big cement plants. In 2008, he achieved a milestone in his business career when his efforts made his company Barak Valley Cements Ltd, public and listed it at BSE and NSE.

In 2007-08 while visiting some ailing tea gardens in Cachar district, Mr.Garodia was deeply moved by the mismanagement of such gardens and sufferings of the garden-workers. A social entrepreneur for whom earning revenue is equally important as social welfare, Mr.Garodia bought six of such tea gardens to help the workers to have better and constant standard of living. He took ethical measures to look after their healthcare and education.

He has been responsible for advancing his Group's business strategies within as well as overseeing the business development and sourcing efforts. With the motive to put his company on global frontier, Mr. Garodia has put up a steel plant in Nigeria. He plans to move to establish several other ventures in other countries as well.

For his commendable contributions to the industry and service to the society, he has been awarded and recognized by various organizations. In 1996, he was bestowed upon with the honour of NATIONAL CITIZENSHIP AWARD by the then Prime Minister of India recognizing for his laudable commitment to help the region.

He takes keen interest in seeing that his companies play its role as responsible corporate citizens. His flagship company Barak Valley Cement has established Vivekanand Kendriya Vidyalaya in its vicinity at Badarpur in Assam, to promote quality education for children residing in that region.

Generous and a true philanthropist, he helps needy people in medical treatment and higher education. He has constantly engaged himself with various business bodies and social organizations. His philanthrophic endeavours have been recognized by different Trust and Societies. He is connected with a host of charitable trusts and social organizations as its trustee / life member. Various organisations he is associated with is well demonstrated in a list enclosed herewith.