It was incorporated in April, 1999. The Company is an ISO 9001: 2008 certified company which has an integrated cement manufacturing plant at Badarpurghat, Silchar, Assam. The company has been marketing its product under the brand name 'Valley Strong Cement'. Presently BVCL is having an installed capacity of 1050 TPD of cement grinding. Company is using Dry Process Rotary Kiln technology with 4-Stage Suspension Pre-Heater in manufacturing of Cement.

BVCL got listed on National Stock Exchange of India Limited and Bombay Stock Exchange of India Limited since 23rd November, 2007. BVCL has captive good quality lime stone mines (having CaO of more than 47%) in its wholly owned subsidiary viz. Meghalaya Minerals and Mines Ltd. within 75 km radius, having deposit life of over 50 years. Further Coal having a calorific value of 6000-7000 Kcal/ Kg. is available in plenty within 90 km radius. BVCL has set up Biomass based 6.00 MW captive power plant in its wholly owned subsidiary i.e. 'Badarpur Energy Pvt. Ltd.' The consolidated turnover of BVCL Group of Companies is around Rs. 133.84 Crore for Financial Year 2013-14. BVCL group of Companies have given employment to 800 nos. of workers directly & 300 nos. indirect employments.

OPC is produced by inter-grinding clinker, performance improver and gypsum in a cement mill. Portland cement is a blend of finely pulverized clinker, produced by burning at high temperature material containing lime, alumina, iron and silica in pre determined proportion to give the desired end proportion. Normally Gypsum or its derivatives are added during grinding stage for set control. When mixed with water alone or in combination with sand and stone, it has the property of combining slowly with water to form hard mass.

The raw material i.e. calcareous and argillaceous with correctives are finely sound and intimately blended and fined in a rotary kiln at high temperature of 14500 - 15000° C. The material which is coming out of kiln is called clinker. The clinker is then cooled and grinded to fine powder along with small quantity of Gypsum (1% to 5%) to give Portland Cement.

Portland Cement when mixed with enough water, the compound present in cement react with water to form a cementations crystalline structure which adheres to the sand and aggregates. This binds the mass together and with growing strength till it become very hard. OPC is produced by inter-grinding clinker, performance improver and gypsum in a cement mill.

OPC is further classified, as relevant in our case as, 43 Grade and 53 Grade OPC. Portland Pozzolona Cement

PPC is blended cement produced by adding pozzolanic materials, such as fly ash, volcanic ash and calcined clay to clinker. PPC can be used for the majority of construction projects, such as in the building of houses, high-rise buildings and bridges. The production process for PPC is similar to that for OPC, but fly ash, the pozzolanic material which is generally used, is mixed with clinker in the cement mill stage of manufacturing. The fly ash content of PPC produced by us is normally between 20% and 25%. The use of fly ash enables cement to be produced using less clinker. P.P.C. is also produced using calcined clay as additive.

Use of fly ash reduce production costs as fly ash, being a waste product from the operation of coal fired power stations, is readily available from thermal power stations and is a cheaper commodity than clinker.

Physical Requirements of BIS for different types of cement : 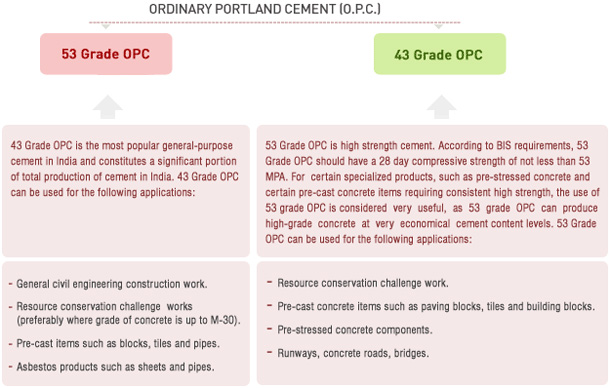